Very groggy from my early start (and late night), I soon found myself on a train to Warszawa, the Capital of Poland. The tickets cost 28 zl each way, and, unfortunately, there was no discount for international students. The experience itself was still worth the cost. This is my third trip to Poland, totalling almost 30 days in the country, and I had not yet set foot in the Capital. Apalling.

On arrival at Warszawa Centralna, you’ll find yourself thrust into a busy city centre. On either side are rows of shops and restaurants. Straight ahead you’ll see the Palace of Culture and Science, a controversial gift from the Russians. Some see it as a symbol of Soviet control, while others recognise it as the landmark of their city. Either way, if you have the time, head inside and explore the exhibitions of technology. The building also contains a Tourist Information Centre if you’d like advice or directions on where to go.

I had a different idea. I purchased a ticket for the City Sightseeing bus at 54 zl for students (60zl for adults). Valid for 24 hours, this ticket enables you to hop on and hop off at your convenience. But be warned, the bus arrives in two hour intervals so if you don’t spend that long at each attraction or go over that time, you may find yourself stranded at the bus stop.

The bus has two different routes, the blue and the red line, and with headphones provided by the driver, you can relax and absorb the history of the city in ten different languages. If you want to go on both routes, just stay on the bus once the tour is over as it alternates (hence the two hour waiting period).

I rode the bus halfway through the red line to the POLIN Museum of the History of the Jews. Polin, a Hebrew word, means “rest here” and the building sits on the former site of the Warszawa Ghetto. This museum is incredible in providing a full-on multimedia interactive experience, tracing the history of the Jewish community from thousands of years ago all the way to today.

Tickets are 25 / 15 zl. They also offer a variety of group and family discounts if you’re travelling with others. I would highly recommend the Audio Guide at 10 zl; this could easily be shared with a partner to save costs as the volume is very loud. Without it, you won’t learn nearly as much from the exhibitions as they are more interactive than educational.

Having spent an hour and a half inside, I made the decision not to wait for the bus, and instead made my own way to the Warszawa Uprising Museum (which was the next stop anyway). The Museum is entirely free on Sundays, which is both good and bad. If you arrive around lunchtime, you’ll find most of Poland queued up outside the door. I would aim for the late afternoon or bite the bullet and pay to see it on a different day. At 18/14 zl per person (£4/£3), the peace and freedom to wander through at your leisure instead of being shoved and jostled is worth the cost. 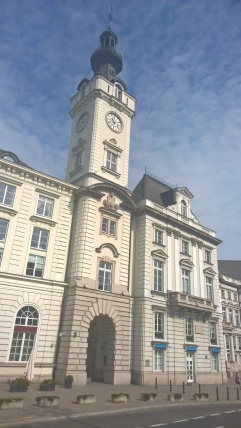 I then travelled back to the POLIN Museum. Thanks to the long queues, it was the four hours later and the bus arrived to pick me up. I continued the tour, passing the Old Town with the Royal Castle, the Music Theatre, and various churches along the way. We then switched to the blue line, where the highlight was the National Museum. At only 1 zl for those under 26, I suggest visiting now while you’re still young.

My trip to the Capital finished with window shopping in the Galeria next to the train station. After a quick meal, I jumped on board and headed back to Łódź.

It was a short visit, and I know I only brushed the surface of Warszawa’s history and culture – but that just gives me an excuse to come back another day!